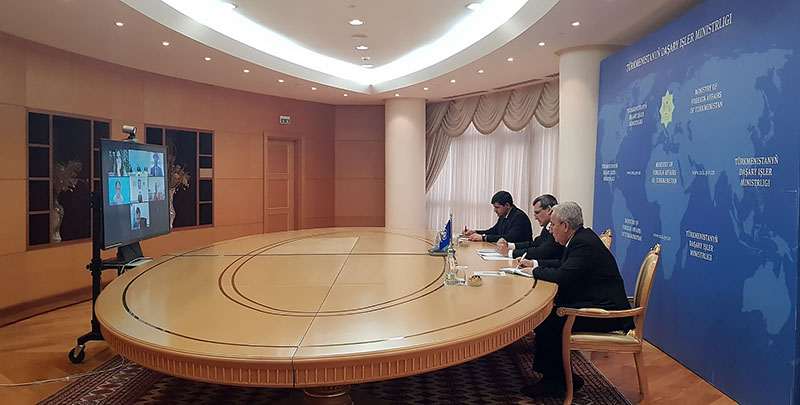 Оn January 16, 2023, the meeting of the Minister of Foreign Affairs of Turkmenistan Rashid Meredov with the Executive Director of the United Nations Environment Program (UNEP) Inger Andersen was held via videoconference. About this repors MFA of Turkmenistan.

During the meeting, the parties discussed the main directions and prospects for cooperation in the field of environmental protection, climate change, ecology and rational use of natural resources.

The fruitfulness of the long-term cooperation of Turkmenistan with the UN Environment Program in the abovementioned areas, as well as the expediency of implementing joint projects in the field of achieving the Sustainable Development Goals was noted.

Informing the head of UNEP about the ongoing work of Turkmenistan in the field of climate change, it was emphasized that the solution of global environmental problems implies the need to combine efforts at the global, regional and national levels, including multilateral interaction and coordination of actions of each of the states with the UN. In this context, the initiative of Turkmenistan was announced to create a Regional Center for Climate Technology for the countries of Central Asia, headquartered in Ashgabat, the main goal of which should be the introduction and application of climate technologies in the countries of the Central Asian region and to promote the technological advancement of the region in the field of climate change.

An exchange of views took place on the work of the Secretariat of the Tehran Convention, in connection with which it was proposed to consider projects related to adaptation to climate change in the Caspian Sea, as well as the development of a concept for marine spatial planning of the Turkmen part of the Caspian Sea.

As for interaction in the field of the environment, attention was paid to the initiative to create the UN New Caspian Environment Program as a set of environmental measures to ensure the rational use of the natural resources of the Caspian, put forward by the President of Turkmenistan at the Caspian Economic Forum in Avaza, Turkmenbashi in August 2019.

Turkmen-German political consultations were held at the MFA of Turkmenistan